Dog gingivitis is an infection of the gums that causes redness and swelling. It is usually as a result of the accumulation of plaque wherein there’s a  mixing of the bacteria found in the dog’s mouth with food particles left attached on its teeth after chewing.  Plaques are very grainy and stick to teeth. With time, the accumulation of the plaque increases and finally it becomes tartar which will usually form on the gums’ line. If you want to learn more about dog gingivitis, then keep on reading to and learn how it’s treated.

A tartar in a dog’s mouth becomes a conducive area for gingivitis growth. Not treating the disease for some time will lead to severe toothache. If you realize your dog has the mentioned symptoms, then you have to take the dog to the vet who will perform the symptomatic tests to find out exactly the causes of the disease. The veterinarian carries out a thorough examination of the affected tooth. 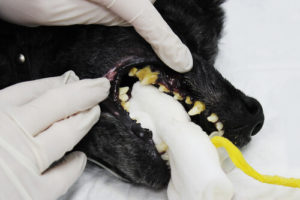 Advanced technology such as the use of the x-ray can also be used to accurately determine the extent of the infection below the gums since much of the teeth structures are below the gums. Remember other serious gingivitis infections such as the tooth root decay and tooth fracture are also well diagnosed using the x-ray.  An Ultrasonic scaling will be used in dog gingivitis treatment. It comprises thorough cleaning above and below the gum line, and polishing teeth will cure gingivitis even for the future occurrences.